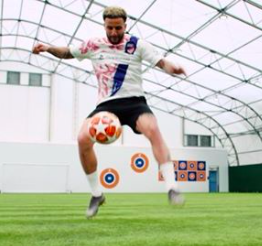 Manchester City defender Kyle Walker has been assigned on a mission. Playstation asked the England international to select 4 players to join Andrea Pirlo and compete in the #PlaystationFCFinal on the Champions League weekend on June 2nd.

The Playstation FC All-Stars team is led by UEFA Champions League winner Yaya Touré and gaming content creator DjMaRiiO, who is also a PrimeTuber and the best Spanish football influencer in the world. The other team, and here’s where Kyle’s task enters, is called Ultimate 11 and managed by two-time UEFA Champions League winner Andrea Pirlo and captained by football freestyler Lisa Zimouche.

Walker’s action through Instagram was to encourage participation for football fans to join these teams and play on the Wanda Metropolitano pitch with Pirlo, Yaya and company: “There are still places left on his team. You’ll also get 2 tickets to watch the #UCL final”.