Luis Suárez keeps promoting Tourism in Malaysia as part of the commercial agreement that started last February and that is getting bigger as months go by. The Uruguayan striker, that this summer celebrated his 100th match anniversary with his national team, gave away personal signed shirts via the Facebook account of Malaysia Travel. The striker has a large following on social media, where he is activating this partnership regularly.

Luis Suarez has been very regular on his social media explaining the great things Malaysia can offer, like the Langkawi UNESCO Global Geopark, the ancient rainforest in Taman Negara or the gable of The Stadthuys in Melaka.

On top of the visibility that brands working with football players and big celebrities can get online, this campaign shows again that brands like Tourism Malaysia can get extra visibility in the press thanks to the association with top players like Luis Suárez. Below these lines, an example from a popular Spanish sports newspaper. 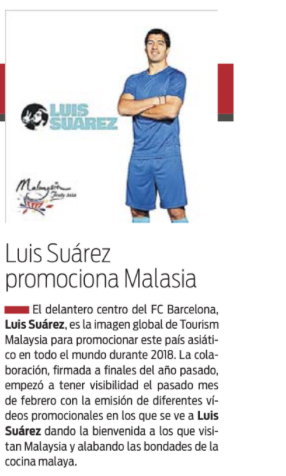