Argentinian FC Barcelona superstar Lionel Messi signed at the end of 2017 a personal endorsement deal with Sirin Labs that exemplifies how the world is evolving and how important new technologies are becoming. In the middle of the Cryptocurrency fever and in an unprecedented move, Messi signed with the world leader in secure open source consumer electronics and will lend his image to the Israeli-based company’s future advertising campaigns as well as a set-amount of posts on his social media accounts, where Messi has a massive following and he has become a fantastic communications platform for his partners. Forbes calculates that in 2016 Messi produced a social media footprint of $53.5 million for his boot suppliers Adidas. 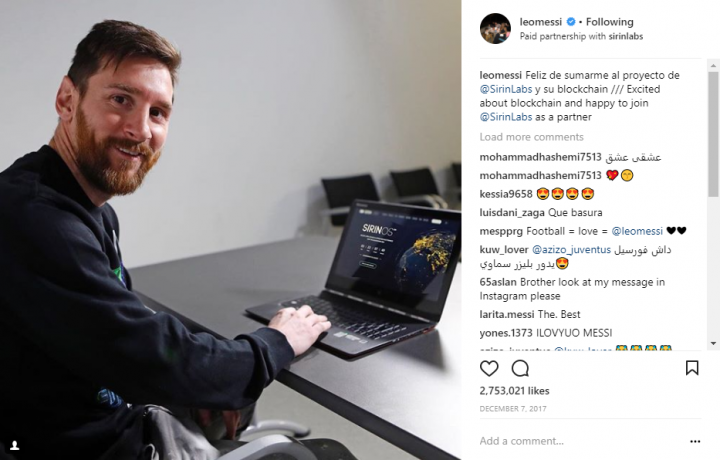 The Barcelona forward announced the partnership on his Facebook (89m followers) and Instagram (88m followers) accounts. Messi pasted that he was excited to join Sirin Labs and make blockchain more friendly for users.  He included a photo of himself in front of a laptop which has the words Sirin OS on the screen.

“We are excited to have Lionel Messi, the best soccer player in the world as the global brand ambassador for Sirin Labs,” said  Moshe Hogeg, chief executive of Sirin Labs. “We have identified the potential of blockchain technology and are developing SirinOS to improve the security and user-experience on the blockchain to encourage mass adoption.”