After last year’s success, H&M has launched a new campaign for the current season, starring the same duo that made it a success in the previous season. The Swedish multinational clothing-retail company has reactivated last year’s campaign, and the new advert promotes this season’s ‘Modern Essentials selected by David Beckham‘ range for H&M, which will hit shops at the end of this month. Like the last time, the video is longer than a normal add (almost 6 minutes long) and during the video you can see David Beckham and Kevin Hart touring together while wearing the H&M Essentials new collection.

Both Hart & Beckham have given visibility to the campaign on their social media channels and announced that clips of the video will be on the American TV. The English player is providing great exposure to the brand, he has almost 30M followers on Instagram, and his video posts reach more than 1M views. On the other hand, the comedian has over 40M followers on Instagram, and 30M on Twitter, also providing a great platform to H&M to share the brand’s message. Below these lines you can see a few examples. H&M‘s idea of working with celebrities from different industries (actor/comedian and football player) is a great way to expand your reach, and not limit it to just the sports world/football industry. 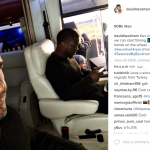 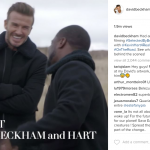 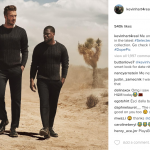