While almost everyone in football industry was talking about transfer window whopping spending, Paul Pogba was relaxed posting a video on his Instagram account that reached 1 million views and 300,000 likes in just 8 hours. The video had nothing special other than most expensive player in football history singing with team mates at France national team hotel. One week earlier, Cristiano Ronaldo had posted a Nike video ad on his Instagram that is already on 2 million views and 700,000 likes (high engagement levels even if being advertising). These are just a couple of examples of audience and engagement numbers that are simply unaffordable for ad blocks in many of most successful TV programs, and definitely at a much lower cost than when brands invest to feature in such videos. 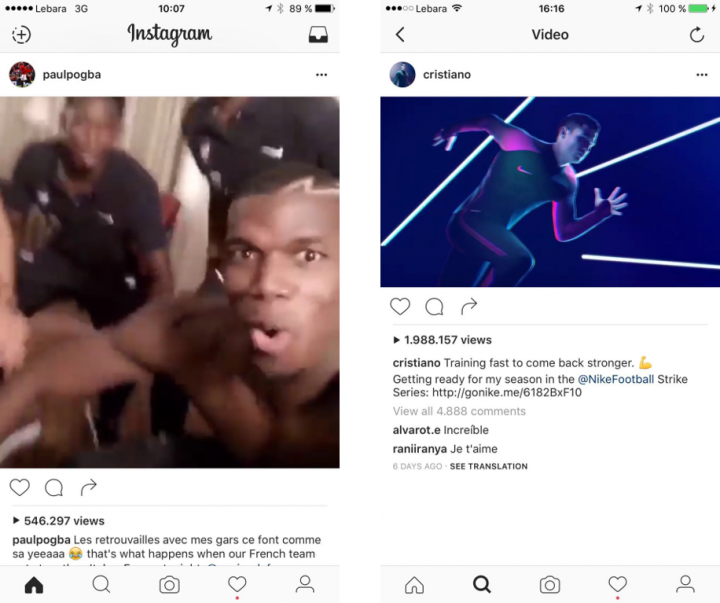 Indeed the irruption of video at most popular social media is changing the content consumption landscape, and inevitably the way brands activate their sponsorship programs and player endorsements. Twitter says views are up by 220 times over past year and time spent watching video on Instagram is up 40%. And YouTube CEO Susan Wojcicki said recently that “Youtube reaches more 18-49 year olds in the US during primetime that the top 10 TV shows combined”.

And Peter Jeavons, brand director of telecos company EE, declared in an interview that “if you are brave, digital can do a more powerful job than a TV campaign” after snubbing TV for second year in a row and focused on digital to advertise Wembley Cup football match, that today will feature most popular youtubers and football legends such as Carragher, Schmeichel, Pires, Kluivert and Fowler. Not surprising if we take into account that videos of last year’s campaign reached 25mio views and 650,000 likes on YouTube, as well as 60,000 comments (of which 99% positive).

With all this numbers in mind, it is not strange that we have seen just some few TV ads during last Euro tournament featuring their ambassadors. Indeed brands have realized that the combined cost of rights fees, advertising on traditional media and other activation costs is just too high. More importantly, they have realized that getting players posting their as videos on their social media accounts if far cheaper, more widespread and allows for direct communication with the consumers. So why spending money on one-way-only expensive broadcast ads?

So here comes the opportunity for those players having popular social media accounts, which are turning into their very own “TV channels” when posting videos from the brands they are endorsing. Therefore, the fact that brands can agree endorsements with players with “built in media” –and hence no need to allow for media purchasing budget- is definitely a game changer, as money allocated to traditional media can move into the rights fees space.

The message for player’s sports marketers is quite straight forward. Focus on recruit followers at social media, posting videos and start selling media advertising rather than traditional endorsements.