Cristiano Ronaldo is approaching his final days as a football player and he is diversifying and increasing the portfolio of businesses he is involved with. He has his own fragrance, his line of clothes and shoes… and now he will have his own hotel chain thanks to an association with the luxury hotel constructor Pestana Group.

The Portuguese star has officially launched the construction project of the hotel chain that has his own name and that will be represented in four major cities around the world: Madeira (where he is from), Lisbon, Madrid and New York.

The Real Madrid striker shared an image of the hotel project in Lisbon on his personal Instagram account: 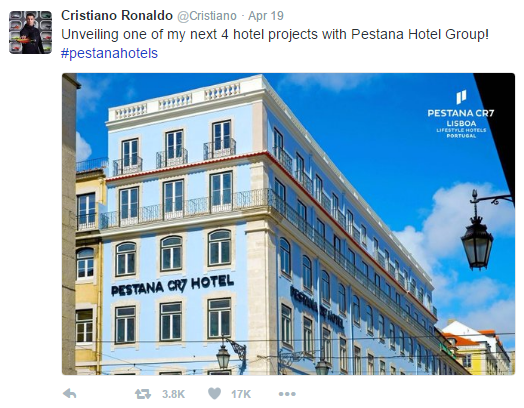 It certainly looks like Cristiano Ronaldo is already thinking about his future after hanging his football boots. Inevitably, he will continue to have many brand endorsement deals but not happy with that he wants to be his own boss and take care of his own businesses, and so he is putting a lot of enthusiasm on this new challenge.