Well, its not quite like that, but Piqué’s intense activity on Periscope has resulted in best promotion possible for this revolutionary app, acquired by Twitter for $100m just one year ago.

Indeed, having Barcelona’s center back conducting 3 live broadcasts in just 4 days has dramatically increased Periscope’s popularity, which was hardly known for the majority of football fans. Furthermore, the fact that such broadcasts took place in spaces where media has no access made such content extremely appealing to fans globally… and for free.

Piqué has been strongly criticized by Spanish media for breaking into dressing room private moments, and also probably because it means –once again since proliferation of social media- that players can distribute their content (now including video and also live broadcast) and communicate directly with the fans with no need of having the media in between. 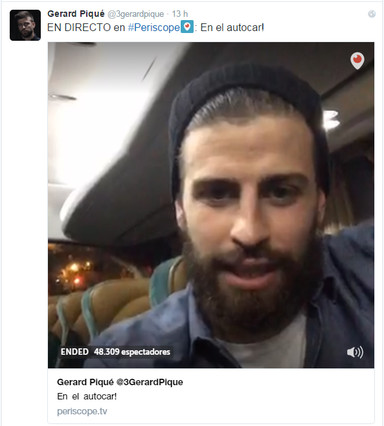 The critics were also suggesting Piqué would be running this Periscope broadcasts in chase of –rather tiny- income arising from advertising sales.

So do you guys think this is right or wrong? In my opinion, there is nothing wrong with it as long as Piqué’s team mates agree to feature in the videos (apart from those he may broadcast on his own), and actually is a very clever communication strategy for a player subject to high level of criticism as a result of his support of Catalonia independence and his straight forward approach in his position of a football superstar… and partner of an even more popular artist.

As for the commercial angle, rather than the actual direct revenues arising from the broadcast of the videos, I believe the media coverage means even higher popularity for the player (which is already top 7 most popular footballer on Twitter with 12m followers). The only challenge remains to turn such popularity into continued signing of endorsement agreements.