At the press conference for MTG’s ‘Athletic Beauty Project’, the company announced that Ronaldo’s image will be used to market their ‘ReFa Active’ and ‘Facial Fitness PAO’ products across Asia.

MTG’s President and CEO Tsuyoshi Matsushita declared: ‘We thought Cristiano Ronaldo was the only person who can represent our product.’

The 29-year-old’s alluded to his link-up with the firm earlier in the week when he posted the Hannibal mask picture online – with this turning out to be one of MTG’s products. 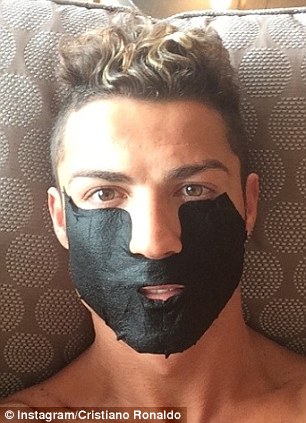 Ronaldo also spent time at a children’s football clinic, also based in Nagoya. The former Manchester United player displayed his trademark skills when playing against them, with him posing for photographs afterwards.

Portugal’s captain also got stuck into the country’s cultural customs, with him being seen pictured attending a traditional Japanese tea ceremony.

‘I think Japan is a fantastic country, fantastic people,’ he said.

‘I had the opportunity to be here before and I know the fans here. They are amazing.’

During the press conference he had time to present the different products and also to speak about various topics and to answer questions from the fans.