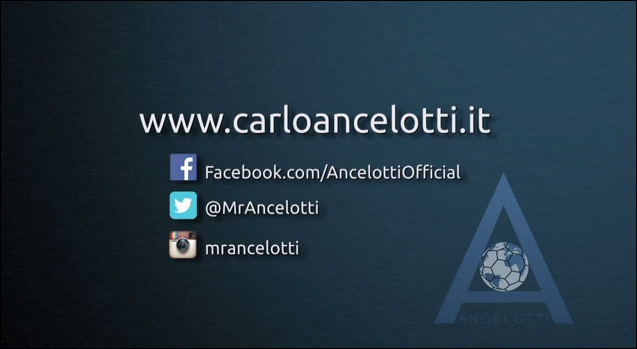 Carlo Ancelotti, after closing a successful first season at Real Madrid with the titles of the Champions League and Copa del Rey, presented his new website in the Italian Embassy in Madrid at an event organized by Imagosport. The technician was accompanied by Ambassador Pietro Sebastiani. Representing the Real Madrid attended sporting director Miguel Pardeza, and communications director, Antonio Galeano.

Carlo Ancelotti also used the event to present his Social Media channels (Facebook, Twitter and Instagram) and to announce the release of the second edition of his book ‘My Christmas Tree’. Thus, the Italian coach is looking to get a little closer to his fans and followers, and to enhance his image and awareness off the pitch, with particular emphasis on his support to Borgonovo Foundation.

The event was largely followed and the media coverage was extensive. It was conducted by jounalist Nacho Aranda and Ancelotti explained some details of the new channels that a coach has to use before giving way to questions where the manager said: “I am a person who likes to listen more than to speak and I understand the importance of these channels to approach people and know what they think.”

The prestigious Italian coach, who already has 19 seasons on the bench, used Imagosport for performing and designing the content of his new website www.carloancelotti.it