Egyptian Liverpool winger Mohamed Salah keeps capitalising on his success on the pitch. Salah has been signed up as a Vodafone ambassador since last December, but has not visited Egypt during his tenure, and Vodafone has just decided that it is the optimum time for activating their partnership with the best player in Africa. Vodafone’s newest ad features Mohamed Salah, as a ray of hope and love for an entire nation. Since his jump into the public’s hearts, he has become an idol, an icon, a family member and a son to many Egyptians, and Vodafone’s newest ad touches on these feelings.

The advert, which can be seen below these lines does not come with any offers, or call to action, and is a purely brand-focused advertisement. It was entirely filmed in London, as part of the Vodafone deal that was signed in the UK several weeks ago, which saw Vodafone Egypt become an official partner of Liverpool FC.

The international telecommunications company has operations in over 30 countries, including Ghana, South Africa and Egypt. With over 439 million subscribers, it is the second largest network in the world, only second to China’s leading telecom, China Mobile. Maybe that is why Vodafone can afford to promise users as many as 11 free minutes for every goal that Salah scores until the end of the season. A new campaign that could prove very expensive if the player maintains his current form. 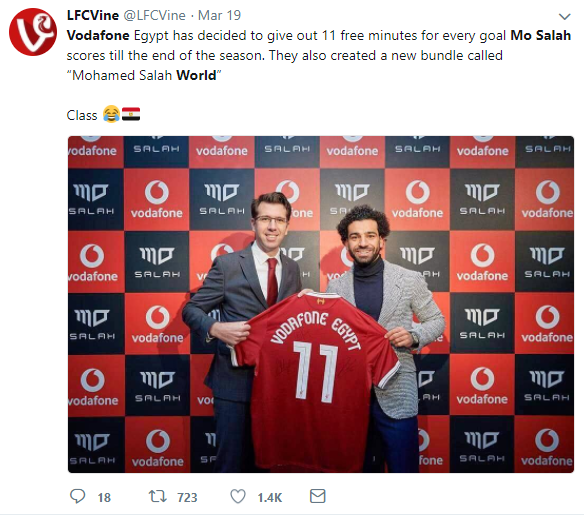