With the arrival of Pep Guardiola everybody is very excited in Manchester and looking forward to the new season. The arrival of the new manager and his style of football will be particularly positive for technical players like Sergio Agüero, David Silva, Kevin De Bruyne or David Silva, and Nike seems to share this thought. The American brand is giving more relevance to players like Kevin De Bruyne and Raheem Sterling in this season’s campaigns. Both players are Nike athletes, like the club they play for, and the brand will turn them into this season Manchester City’s representatives.

They were both the stars of the campaign for the new kit and are taking up all the space on shops and websites. The players are also making their best to give visibility to the brand and in the example below we can see a tweet from Kevin De Bruyne on his official account. 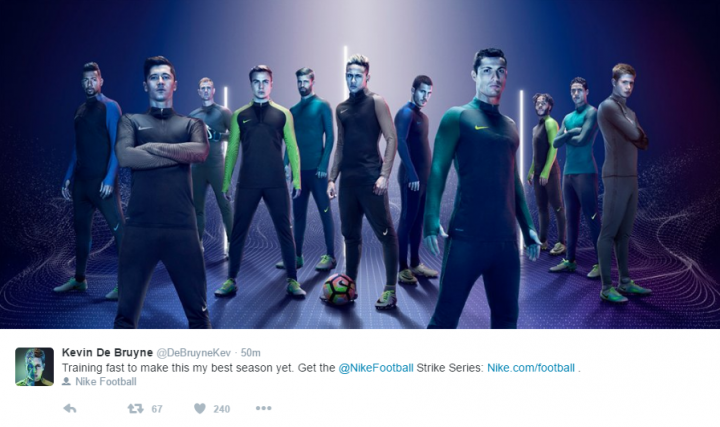 In the image attached both Raheem and Kevin share the spotlight with the likes of Cristiano Ronaldo, Neymar, Robert Lewandowski or Gerard Piqué.