New York City FC fans lined up next to a trio of New York City’s iconic tour buses along the West Side Highway to see the unveiling of the new customized David Villa, Frank Lampard and Andrea Pirlo double-decker buses. The ceremony was put on by Ride of Fame, a worldwide series of buses monumentalizing public figures. 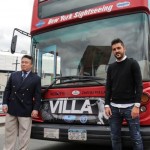 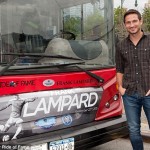 Villa, Lampard and Pirlo cut the ribbon in front of their respective buses as fans and media snapped pictures. Each honoree was bestowed their own tour bus, complete with player imagery on the exterior and a personal seat with a written message to the fans on the upper deck.

To close the celebration, the players took photos on the top of the buses, signed New York City FC memorabilia and mingled with fans.