Gareth Bale’s transfer was worth a reported £86m in 2013 but Real Madrid is making the best of it both on and off the pitch. Sony Mobile recently announced that Real Madrid and Wales star Gareth Bale will be the new global ambassador for Sony’s Xperia Z3 range of smartphones.

Sony has already started using the brand’s new ambassador and the brand has kicked off a month-long competition as part of the partnership, giving anyone who purchases a phone from the Z3 line-up from a Vodafone store the chance to win an all-expenses-paid trip to Madrid to watch a game, and train with Bale on the pitch.

The mobile subsidiary of the technology giant has confirmed that more “extraordinary experiences” with Bale will follow as part of the one-year partnership.

Sony Mobile‘s marketing director, Catherine Cherry, pointed out that fitness is a key passion point for their customers and working with such an established athlete means that Sony can reward them like never before.

The news comes after the recent outlining of a strategy overhaul at Sony Mobile, with chief executive Kazuo Hirai putting the emphasis on growth areas within Sony, such as Playstation and cameras.

Gareth Bale used his social media accounts to announce this new partnership and to kick off the first competition with the brand. Having a fan base of millions of people on social media is a powerful argument and a strong selling point for Gareth Bale and it is a great communication platform for Sony. 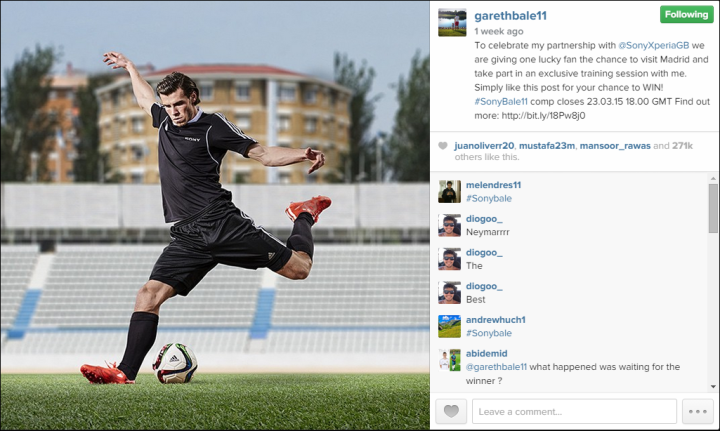