David Villa showed his acting skills in a recent collaboration with singer-songwriter Sarah Packiam and musicians Tim Mitchell and Albert Menendez in the song “New York City All The Way” addressed to all fans of New York City Football Club.

The ultimate goal of the song is to become the new anthem of New York City fans ahead of the start of the new Major League Soccer season. David took part in the filming of the music video set in the streets of the Big Apple and in a studio.

“New York City All The Way” is not the official song of the club, but its lyrics have been composed in order to encourage fans to fill the stadium at the premiere of their team in the competition.

David Villa was happy with his involvement in the shooting. “It was a different and fun experience, I hope the song appeals to fans of NYCFC”. The striker also declared that “Sarah Packiam and Tim Mitchell are two great musicians and they have made this song with a lot of love “. In addition, part of the benefits from the sale of the song will be donated to a charitable organization of the City of New York.

David has also used his social media accounts to promote the song. 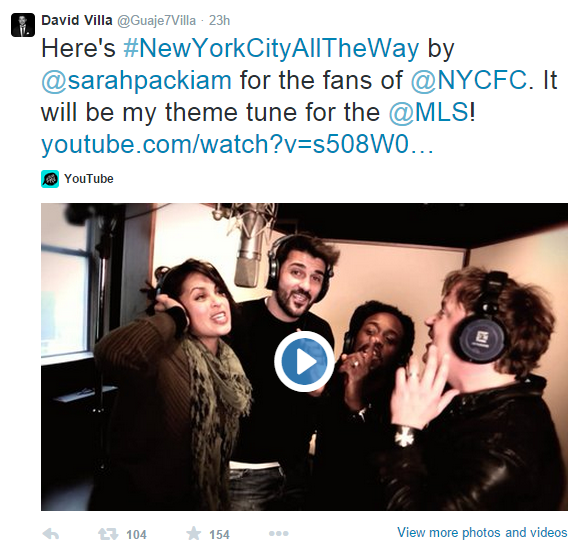