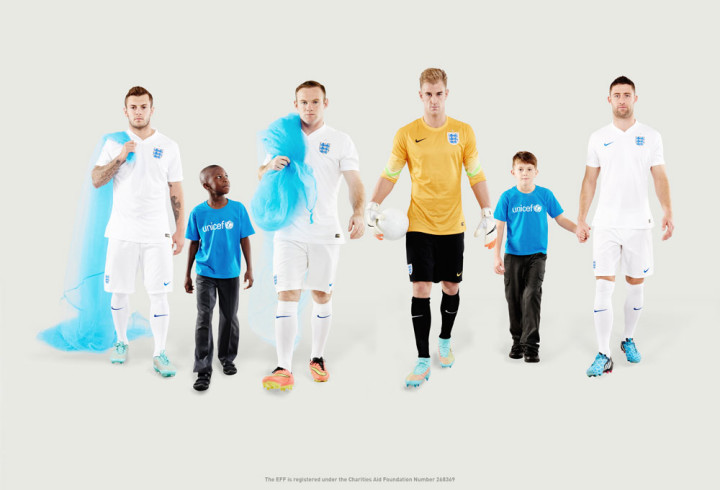 The Three Lions have taken on their most challenging opponent yet as the England Footballers’ Foundation (EFF) team up with Unicef.

The new four-year partnership with the world’s leading children’s organisation will help tackle malaria – a disease that still claims the life of a child every thirty seconds.The partnership will use the players’ global status to raise funds and awareness – both at home and around the world – about the danger of malaria and the benefits of sleeping under a mosquito net.

To launch the partnership England captain Wayne Rooney, along with Joe Hart, Gary Cahill and Jack Wilshere feature in a series of striking images alongside children from William Shrewsbury Primary School, Burton upon Trent.

“It’s unbelievable that every ninety minutes – the time it takes to play a football match – 180 children will lose their lives to malaria,” said Rooney.

“As captain of the England football team I am hugely proud that we are able to help Unicef in its goal of protecting every child in danger from this disease.”

Joe Hart added: “I have always been a huge fan of Unicef’s work so it’s really amazing that through our Foundation we can help make a difference to the lives of some of the world’s most vulnerable children”.

“For some children, being able to sleep under a life-saving mosquito net can mean the last line of defence from this deadly disease.”

Unicef UK Executive Director David Bull added his own words of support for the partnership: “The faces of the England football team are some of the most recognisable in the country so it is great to have them on board to help us raise awareness to tackle malaria and protect all those children in danger.”