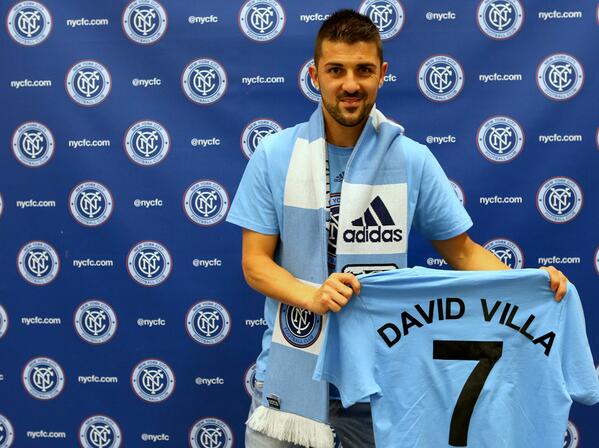 New York City FC recently announced through all channels the first signing of the club’s history, and the club hasn’t just signed anyone to be the first player in the club’s history — they’ve signed 32-year-old World Cup winner David Villa fresh off his Champions League final start for Atletico Madrid and just before he heads to Brazil as a member of Spain’s national team. Villa signs a three-season deal with NYCFC, who begin play in MLS in the 2015 season, after just one year with Atletico in which he scored 15 goals across all competitions for the Spanish champions. Prior to that, the Spanish national team’s all-time leading scorer spent three years with Barcelona, winning La Liga twice and the Champions League once. 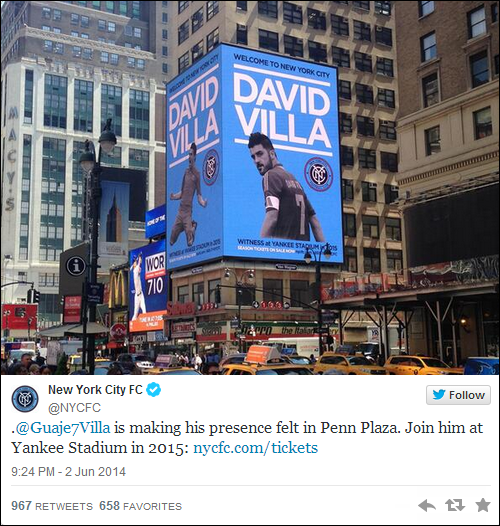 Moreover, it was also announced that David Villa will play for three months in Melbourne City FC, until the MLS season kicks-off in March. The announcement had great visibility and huge amounts of media coverage, not only in Australia, but all around the globe. 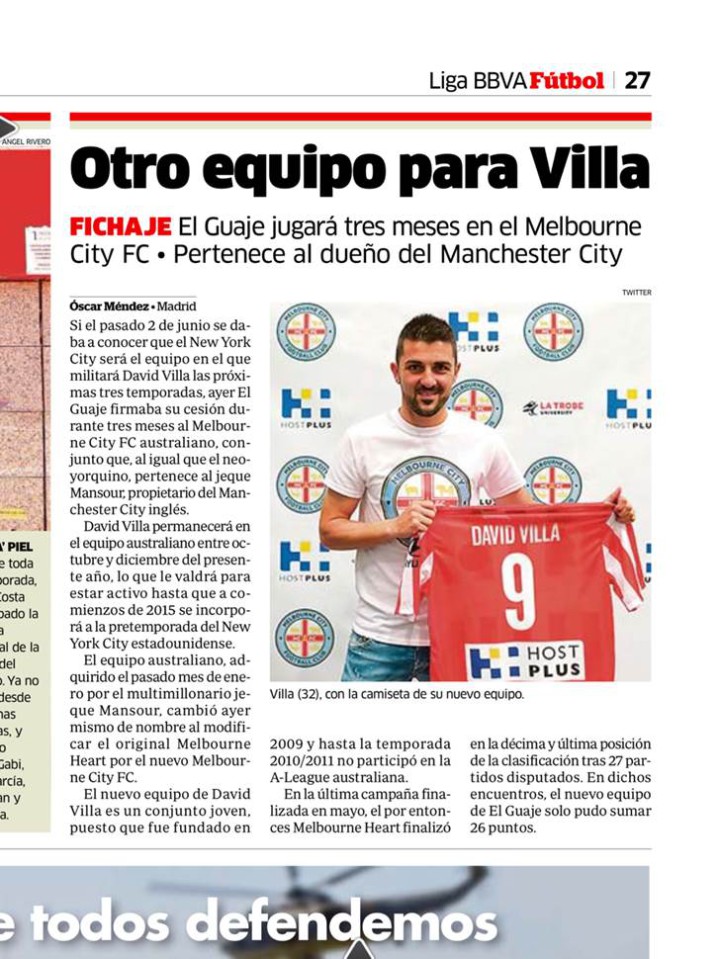 You can read below the official press release from NYCFC:

As the club begins to assemble a competitive and dynamic squad, fans in New York will have the opportunity to watch one of the biggest names in world soccer when the Club’s inaugural season begins in 2015.

“This is a historic and exciting moment for the City family and the building of New York City Football Club,” said City CEO Ferran Soriano. “I know David really well; he is one of the best footballers in the world, a true winner and in an outstanding moment of his career. I’m sure New Yorkers will enjoy watching him play for their city.”

“David Villa is undoubtedly one of the most accomplished soccer players and best strikers in the world,” added Jason Kreis, Head Coach, New York City FC.  “I couldn’t be happier that we have acquired such an amazing talent as our first-ever signing.  David will be a shining example of what it will mean to be a New York City player and a leader for us on and off the field.  He is hard working, he is a natural competitor, he is a winner at heart, and he is a terrific man.  David has checked every box for what we were looking for in our first signing and it is a great day to be a member of this growing family of a club.”

Claudio Reyna, New York City FC Sporting Director commented, “David is the perfect first signing for New York City FC. His individual accomplishments are remarkable.  He is the Spanish National Team’s all-time top goal scorer as well as the first Spanish player to ever reach 50 international goals.  He has won three La Liga championships, the Champions League, and will be playing in his 3rd World Cup this summer in Brazil. His experiences, including winning the 2010 World Cup, will be invaluable for building our club’s sporting culture. I couldn’t be more excited to welcome him to New York City and have him as our club’s first player.”

After almost a decade, Villa remains one of the world’s best strikers and is a hero in Spain for his performances in the domestic league and from his international success playing for the national team.

Villa will wear the No.7 shirt as he has done throughout the majority of his career including his time in the formidable Barcelona side between 2010 and 2013.

“Throughout my career I’ve always tried to keep pushing myself to achieve new targets and this represents another important goal for me”, said David Villa.  “I want to try and help MLS continue to grow, through playing, working hard, scoring goals and at the same time try to make New York City FC become the best team in the league. It’s a real honor that the people who have formed the club have focused their attention on me. I’m keen to do the best I can, take on board that extra responsibility and prove my worth by repaying the confidence they have shown in me.”

On the prospect of playing at Yankee Stadium, David Villa commented, “I’ve been fortunate enough to have played there before with the national team, but now I’m playing there as part of the home team; I hope a lot of people turn out to watch us.  It would be nice to create expectation for the fans before the season starts by playing well and getting good results so that New Yorkers can watch their soccer there, identify with their team and become New York City fans.”