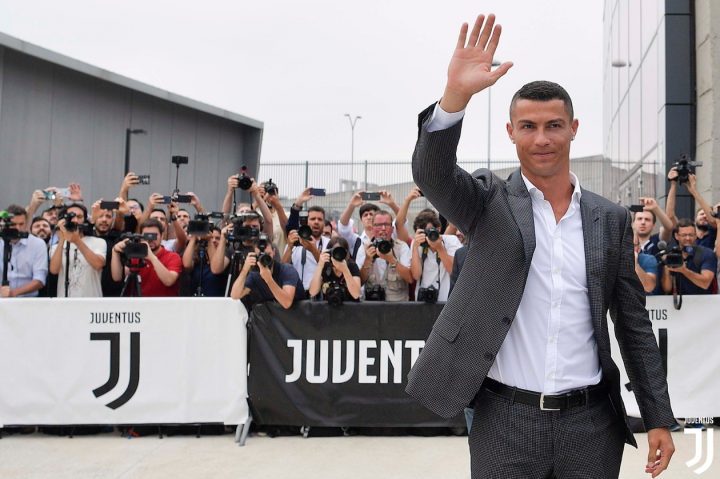 Rumours about Cristiano Ronaldo’s departure from Real Madrid had been rising Juventus’ value on the stock exchange for weeks until the news became official last Tuesday. Real Madrid’s most influential player of all-time ended a 9-years fairy-tale story at the white house, having won 4 Champions Leagues (3 of them in a row), 2 La Liga titles and 2 Copa del Rey, scoring 451 goals and adding 4 extra Ballon d’Or to the one he had won with Manchester United. Stats speak for themselves and show it will be an incredible headache to identify who can play the Ronaldo role in Madrid from now on. 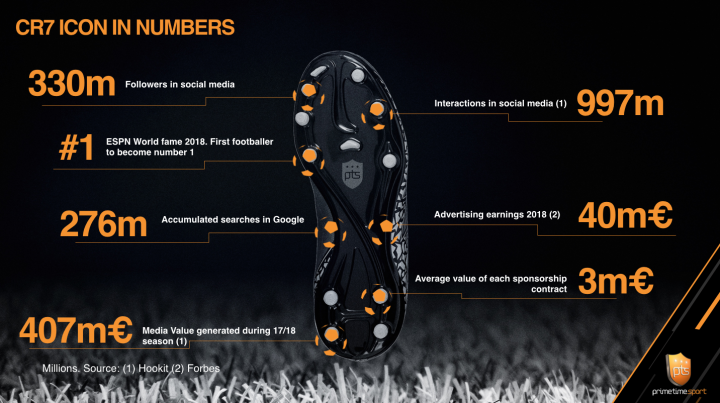 Apart from having lost their superstar on the pitch, Cristiano Ronaldo’s departure to Juventus also means that Real Madrid will also miss a vital cog in the club’s well-oiled marketing machine, especially since the arrival of Florentino Pérez. From a marketing point of view, a replacement simply doesn’t exist and won’t exist in the forthcoming years. 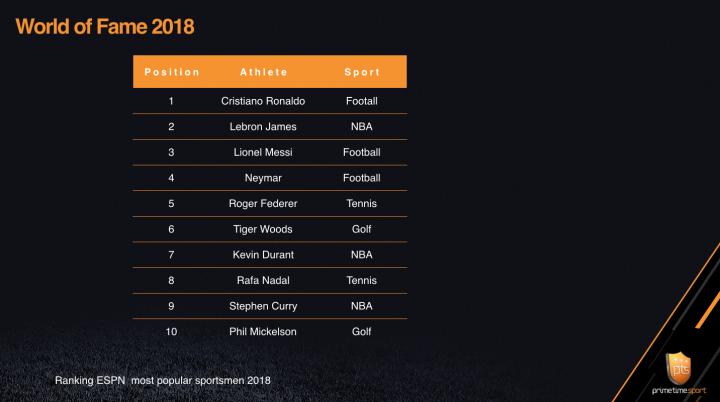 All the figures from the Ronaldo “brand” can be counted in millions. From the 94 million euros Real Madrid paid for his transfer back in 2009 –back then most expensive ever beating by far the 72 million paid for Zidane-, to the 330 million followers he has in social media. Not even Lionel Messi (78% less) or Neymar (64%less), come close. Despite being 33 years old, Ronaldo earns 40 million euros per season in advertisement agreements and generates more than 400 million euros in advertising value for his sponsors. Cristiano Ronaldo has just been considered as the most popular sports star in the world in a ranking usually dominated by North American sports celebrities. 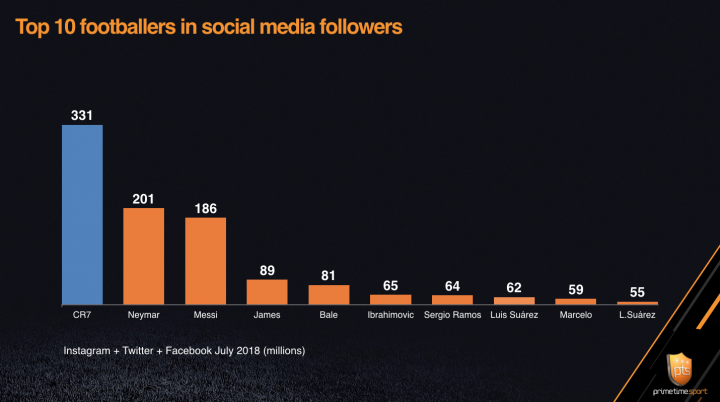 So only one year after Neymar’s departure to PSG, LaLiga loses the second of the three big icons of this football era and once again he is not heading to the Premier League. Real Madrid says goodbye to one of the big revitalizing assets of their marketing earnings. Not for nothing, during Cristiano’s 9-year spell at the club Real has doubled its marketing revenues to a whopping 250 million euros per year, more than any other club in the world and with Cristiano featuring in all the club’s major sponsors advertising campaigns. Some of them were already produced for the new season.

An army of 330 million followers going away is not precisely good news, especially when it accounts for as much as 43% from the whole squad totals. In fact, Cristiano has even more followers than the Real Madrid brand itself (200 million). By the way, if at some point Barcelona loses Leo Messi, they will find even a bigger crater (he accounts for 45% of Barcelona players followers). 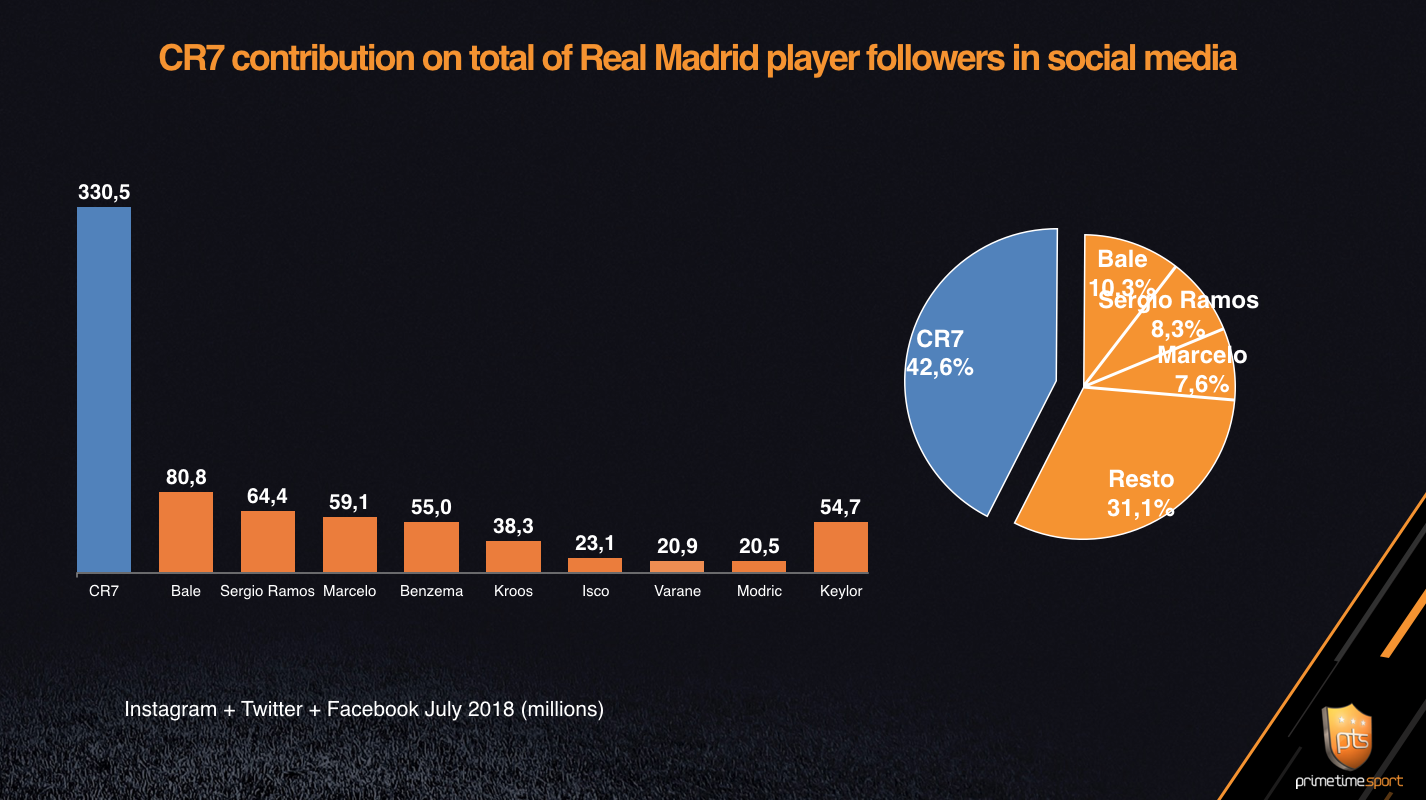 Not only La Liga and Real Madrid will be affected by the departure from the Madeira superstar. The victims list is long and includes sponsors from both institutions –especially Adidas, that will have it hard to counter the effect with the rise of Juventus’ shirt sales-, and the brands that sponsor CR7 personally, taking into account the enormous media difference between Real and Juventus. Television broadcasters that are right holders of LaLiga will also suffer (for the possible audience impact) as the rest of the national media that found in Cristiano a news machine capable of producing hours and hours of content. In such list we must also include the Spanish Tax Agency, that had a long-time conflict with the Portuguese players and will stop collecting no less than 15 million euros per year. 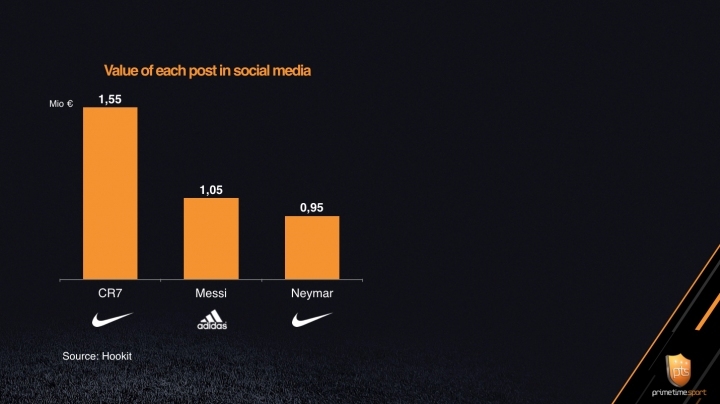 Anyway, what will certainly not be harmed is CR7 bank account, that managed to sign a 4-year contract of 30 million euros per year being 33 years old plus retaining 100% of his personal image rights. He therefore didn’t seem to care much about the differences between one league and the other and Real and Juventus. The question though is to see if he will be capable of maintaining the same rhythm of commercial agreements he is used to, that take up most of his social accounts activity. His aggressiveness in this sense is far superior than, for example, Leo Messi, who is much more cautious in this matter. 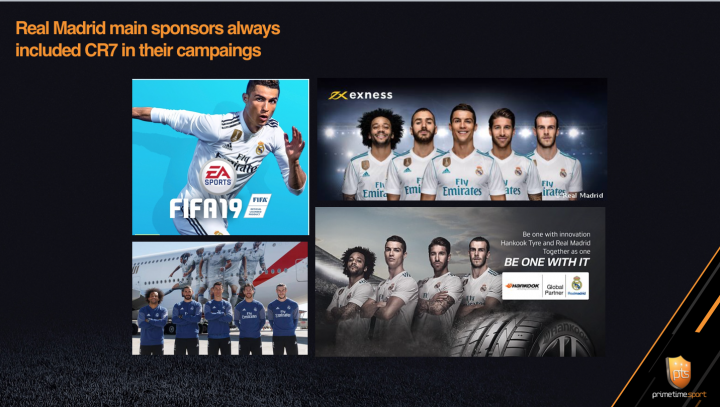 Confusion in Madrid contrasts with joy in Turin following the announcement of CR7 signing. Juventus have seen a 30% rise of their shares on the stock market during the week. Shirt sales with their new Vecchia Signora “sette” increased and collapsed the online store of the Italian club. And they also saw an 11% boost in Instagram followers, a whopping extra 1.1 million new users in just a week. 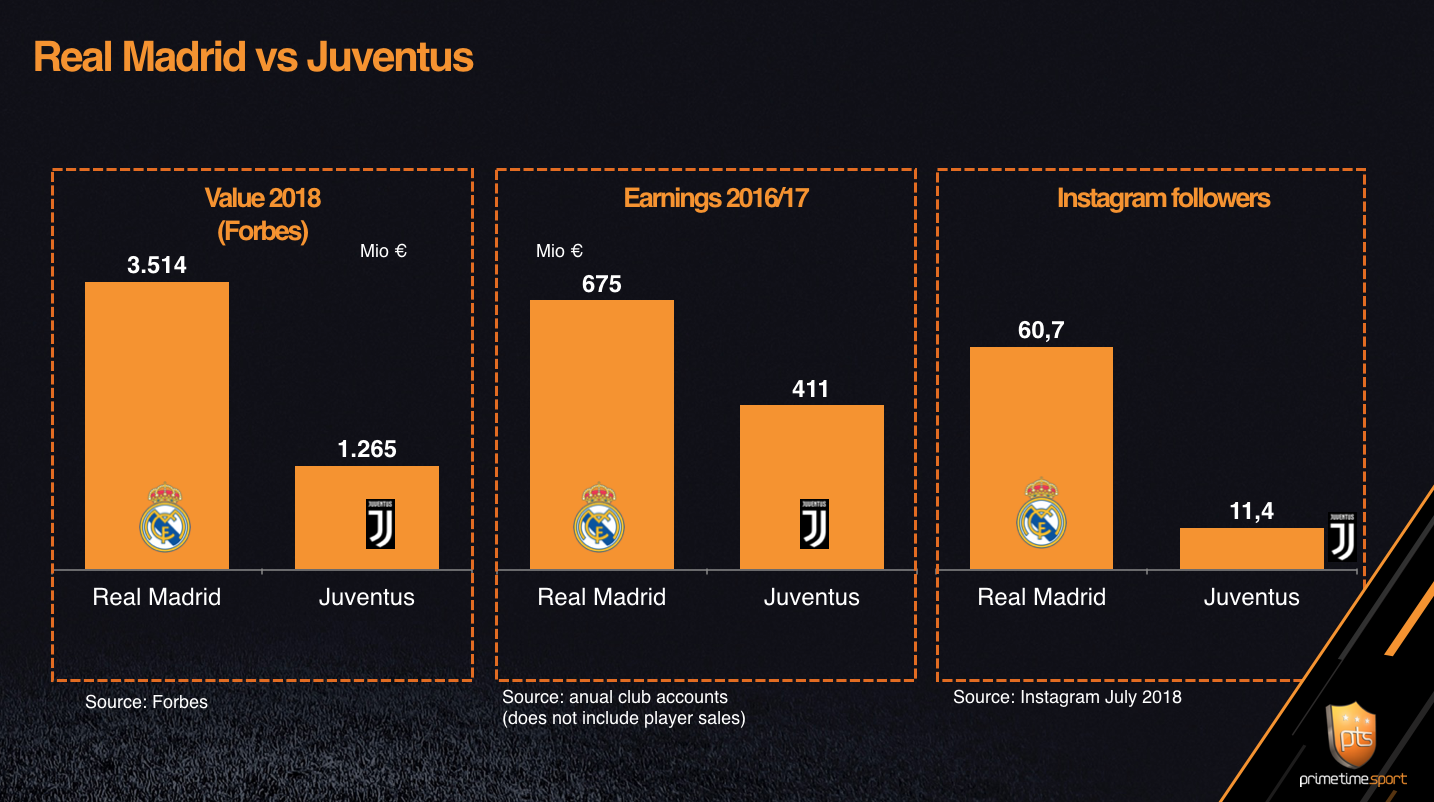 Media and Juventus’ marketing executives also rub their hands. These last ones have already started the sponsors hunt, that will be required to make the signing profitable and dribble UEFA’S Financial Fair Play. The Fiat union strike threat –30% of the company is owned by the Agnelli family- as they consider Juventus have overspent in the signing will remain as just an anecdote.

Life goes on and without any doubt Real Madrid will be capable of signing new ‘Galacticos’, or even learning how to produce them. However, years will pass until they can have an icon of Cristiano Ronaldo’s dimension, in case this ever happens. However, Real Madrid’s marketing savoir faire –and even more after winning 3 Champions Leagues in a row- should allow Los Blancos to offset CR7’s commercial departure impact. In any case, the hunt of the lost icon has already started…