Brazilian giant Guaraná Antárctica has a new face in football: Gabriel Jesus. The brand recently signed a 4 year deal with the Brazilian striker, who will be one of the brand ambassadors, next to surfer Gabriel Medina. The company, which is an official partner of the Brazilian National Team, has been always involved in football and used football players to reach a wider audience and to engage with fans and consumers. With less than a year to go until the 2018 FIFA World Cup, Gabriel Jesus follows the steps of Neymar Jr. on becoming the face of the brand.

This is Gabriel‘s first contract since signing with Octagon, owned by Ronaldo Nazário. The agreement between the athlete and the agency was signed in June, precisely with the plan to raise new sponsors to the player in this period before the World Cup, as the market increases the search for names of the National Team.

To make the first activation with Gabriel Jesus, Guaraná Antarctica reached out to the son of one of the employees, a resident of the community of Maués, in the Amazon. The boy, named Danilo, received the surprise visit of the player, the two played together in Porto Alegre and Gabriel Jesus took the opportunity to share it with his fans on social media. 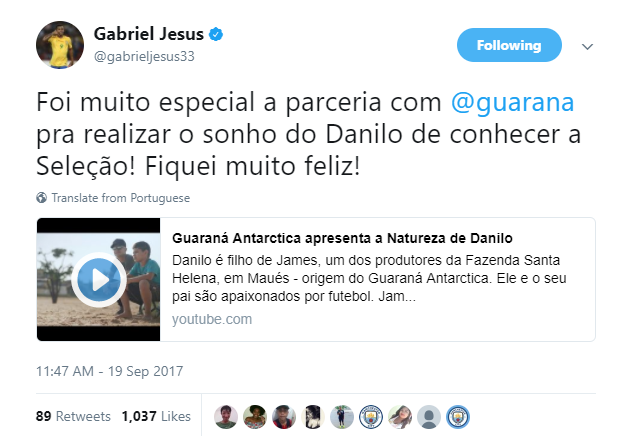