Joining the likes of Lady Gaga or the All Blacks, David Beckham became Tudor‘s newest ambassador a few months ago. The Swiss watchmaker launched its partnership with the English star by making him the face of the brand’s new “Born to Dare” campaign, a tagline created to reflect on both its brand history and its possible future by alluding to the pioneers that have worn both Tudor and its parent company Rolex. According to the brand, David Beckham is enamored of wristwatches and already privately owns several Rolexes. Its brother brand Tudor had a very clear idea when it was founded, to provide quality timepieces at economical prices.

Since then, Tudor‘s long history as the go-to watch for adventurers, explorers and hip horologists alike has produced a number of contemporary classics that David Beckham is now promoting on different supports (website, billboards, printed ads, etc.). He has also taken the opportunity to share it a few times with his +40m fans on Instagram. 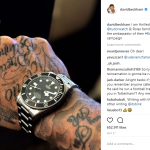