Unicef ambassador David Beckham has participated in another campaign to spread the messages of the organization, this time he lent his body as a canvas upon which his tattoos turn into animations and tell the story of child abuse. Beckham has worked with Unicef several times, and even now that he retired from football, he remains as one of their most valuable ambassadors. He is also very active on social media, and that gives brands great exposure and turns him into a great communications platform.

The 60 second video of the campaign, which can be seen above these lines, tells different stories related to child abuse, looking to share common scenarios that arise in schools, homes or online communities. The creative director mentioned: “it was important for us not to hold back, and expose the horrific realities of violence against children”. Jonas McQuiggin, director of the ad said: “To me, the final product speaks for itself. It’s a remarkable example of how powerful and compelling stories can be communicated in a non-conventional way”.

Beckham took the opportunity to share the video with his more than 31m followers on Instagram, and the video colleected more than 2.2m views in just a week, proving that he is indeed a fantastic communications platform to spread Unicef‘s message. 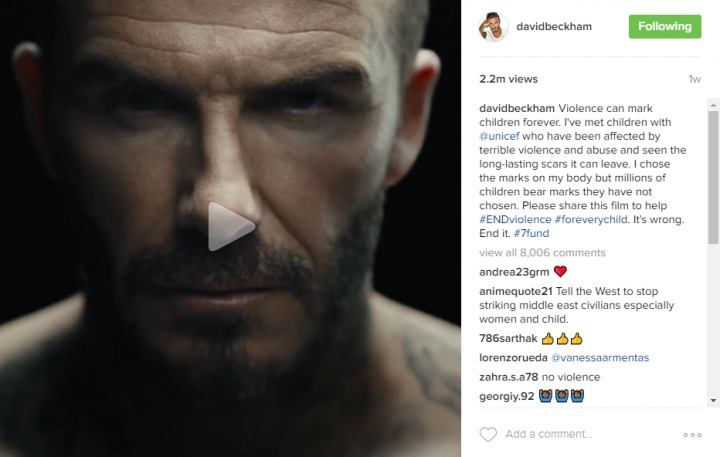