We are very happy to have helped Kevin De Bruyne feature in the newest global campaign for Beats by Dre. The headphones experts, bought by the American giant Apple not so long ago, have gathered some of the best athletes of the moment for the brand’s global campaign “BE HEARD”, ahead of Christmas.

In the TVC, which can be seen above these lines, Kevin De Bruyne “dances” to the rithm of the iconic “Seven Nation Army” by The White Stripes, next to some of the best athletes of the moment. Stars like Tom Brady (NFL), Serena Williams (Tennis), Michael Phelps (Swimming), Antoine Griezmann (Football) or Lebron James (NBA) took part in the new global campaign, which is currently on air and being heavily promoted on social media as well through the athletes and the brand itself. The advert has been a total success and has almost reached 5m views on youtube. 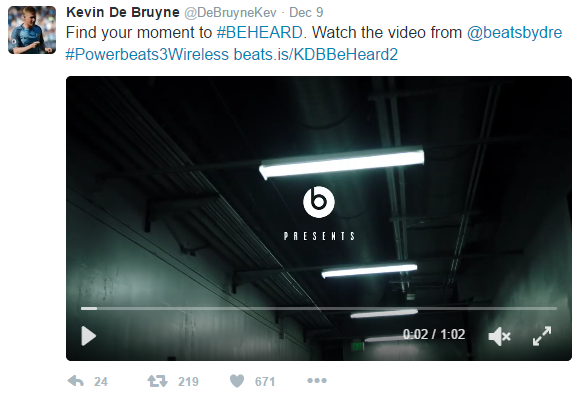