Colombian and Real Madrid star James Rodríguez has recently agreed a personal endorsement deal with fashion brand Calvin Klein. Despite not shining on the pitch as much as he did in previous seasons, James keeps scoring goals off the pitch. The Colombian midfielder is the new face of Calvin Klein’s 2016 #mycalvins global campaign. He joins a host of famous faces on the campaign, such as actor Mark Wahlberg, musicians Justin Bieber and Frank Ocean, and models Kate Moss, Kendall Jenner and Bella Hadid.

In a video posted on Calvin Klein’s official YouTube page the midfielder revealed his slogans for the campaign to be ‘I am quick in #mycalvins’ and ‘I look ahead in #mycalvins’.

James Rodríguez is not the only football star to advertise for Calvin Klein. Arsenal’s Swedish winger Fredrik Ljungberg had a long-term affiliation with the renowned global brand during his career and last season we saw Chelsea’s Oscar modelling for the brand. As it’s common practice with every commercial collaboration with a celebrity, Calvin Klein is using James‘ social media accounts to reach a wider audience and to gain exposure globally. Below these lines you can see an example on his Instagram account, where he has almost 25m followers. 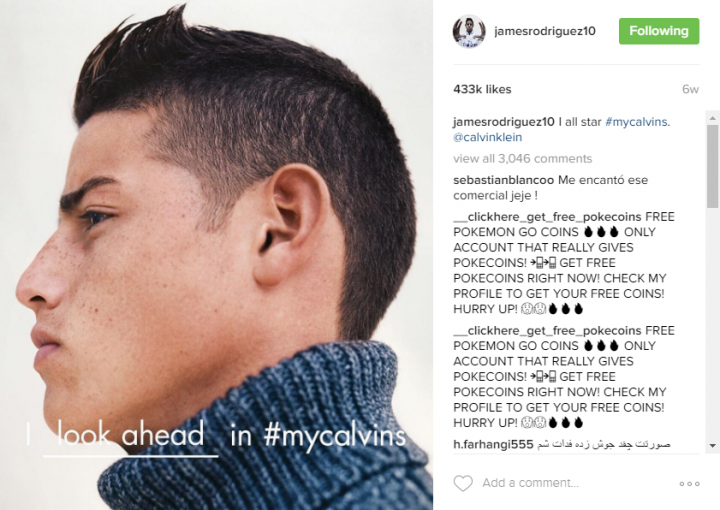