Confirming his great form, Manchester City player Kevin de Bruyne was named the best Belgian player of 2015 by the fans of the Belgian Red Devils, the Belgian football national team. The attacking midfield happily shared the news in his personal Twitter account. 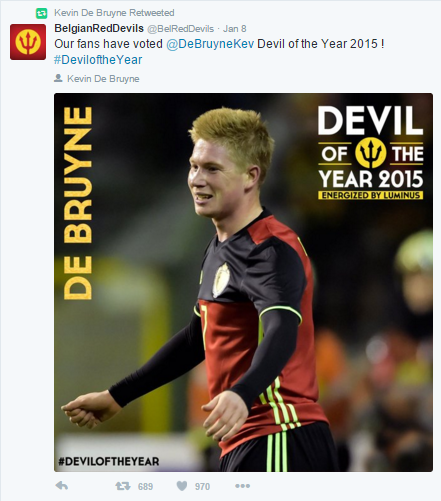 His national team mates Mignolet, Mertens, Hazard, Nainggolan, Courtois, Fellaini were the other nominees but De Bruyne is unstoppable. He also won the recognition as the best Bundesliga player of the year of the last season 2014/15 by the prestigious German sports magazine ‘Kicker on Monday’.

De Bruyne –who is expected to be back in the pitch next month after a severe knee injury– has become a key player also for his current team Manchester City. A good proof of this is that the 24-year-old also won in December the Manchester City contest ‘Etihad Player of the Month’ for the third time in a row, having previously won in October and November (you can see it in the video below these lines).