Leo Messi is one of the most influential athletes in the world, and certainly shares the podium of footballers with Neymar Jr. and Cristiano Ronaldo. On social media it’s no different. But having a huge fan base is not enough sometimes. If you want to reach a wide audience you need to put some thinking on how to do it. Brands might feel that working with someone like Messi is more than enough to be successful on social media and raise brand awareness. This example proves otherwise.

People don’t like to see adverts on social media and they don’t react to them or engage with the brand or the player who has posted it. People on social media are looking for unique content that can get them closer to their idols, that’s why advertisement on social media works much better when it’s personal and it feels natural.

Posting ads on social media using the same formulas as if they were to be published on a magazine or shown on TV can have a very low response rate. In the example below Messi got only 36,000 likes out of almost 81m followers that he has on Facebook, which represents a very low 0.04% engagement rate. 10 times lower than the average 0.4% that brands could expect to get. 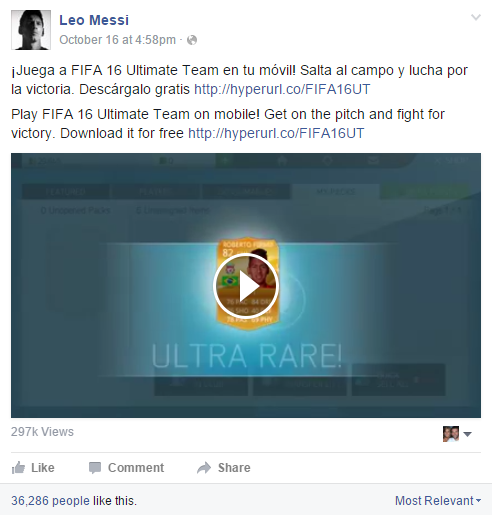