Casillas invested nearly half a million euros in shares of Bankia in what turned to be a very bad investment due to the bank’s bad praxis. Thus, besides offering his image to promote the law firm, he is also one of its clients. 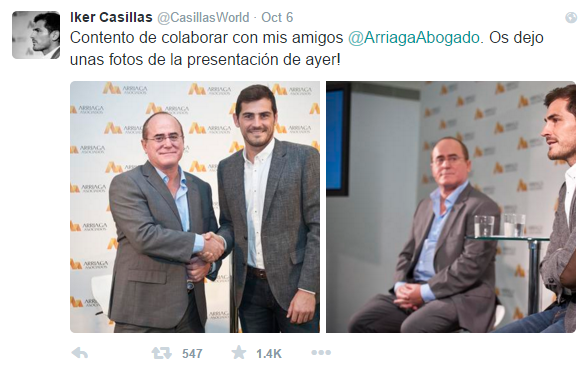 Jesús María Ruiz de Arriaga, director of Arriaga Asociados, announced Casillas  as the image of the firm on Monday in Madrid (in an event that was later promoted by Casillas on his Twitter account) and also presented the new TVC that features Casillas on the streets of Oporto, which can be seen above.

Arriaga, specializing in banking and finance law, is one of the most active firms when it comes to advertising to attract new clients, especially affected by Bankia. Arriaga’s campaigns, in addition to the media, also includes LED in some stadiums.