Gillette have announced that Neymar Jr. is to be the brand’s new ambassador for Latin America. The association was made public at a press event at Camp Nou which looked back at some of the most memorable moment from his successful career so far, focusing on his precision and relating that to the connection between the ambassador and the brand. The player will give the brand good visibility through digital and traditional marketing campaigns and other events like the announcement of this new partnership. Several different media attended the event and it gave the brand great exposure when it was published the next day. Below these lines you can see an example for Spanish Mundo Deportivo. 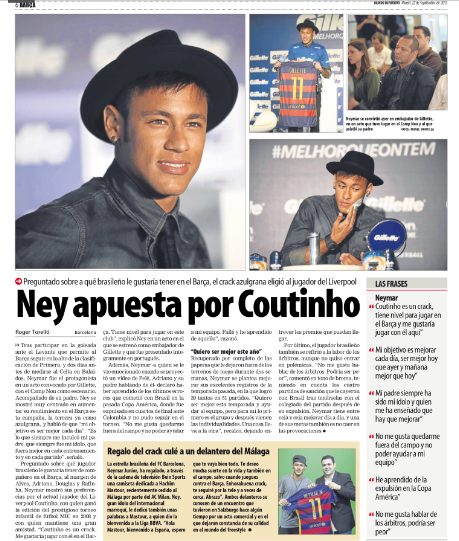 During his appearance on Monday, Neymar Jr. witnessed videos from people who have accompanied him during his career. He joins the likes of Pelé, Messi or Roger Federer in Gillette’s portfolio of sports ambassadors.

Gillette is a leader in the world of men’s grooming and is the official sponsor of the Club in Latin America until 2017, as was announced in October 2014 in an event that also involved Leo Messi. With Neymar Jr. the brand has a new asset to further activate its partnership with FC Barcelona and to make the best of it.