Iker Casillas was recently spotted in Madrid when he attended a marketing event with his new partners Fútbol Factory. Moving to Portugal and leaving Real Madrid has been a tough decision for the player and a critical one commercially wise. Some of the agreements that Casillas had in the past where regional agreements for the Spanish market and his move to Portugal was not ideal for brands with a heavy Spanish focus like BBVA or Mahou. However, FC Oporto’s new goalkeeper has signed a new cooperation agreement with the company Fútbol Factory, with the aim of making it the leading football store in Spain, offering a unique shopping experience for all football fans. 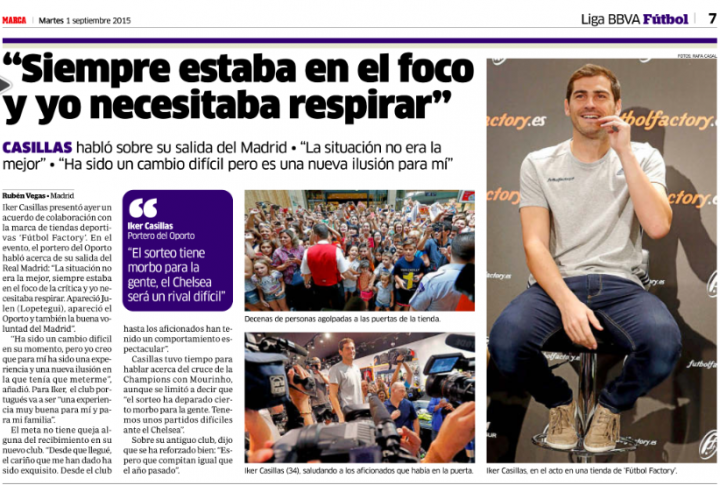 The sports apparel specialists Fútbol Factory brought Iker Casillas to Madrid for the signing of this agreement and announced that it’s a big step for them because in the sports industry one can’t find a better ambassador than Iker, a great example of perseverance and dedication. The event was largely followed and the player had the chance to speak in front of Spanish media that covered the event, which would later give great visibility to the brand when the interview was published, and to share his thoughts about his former club and his new life in Portugal.

The company will give an important boost to this agreement, through the design of a new corporate identity, the launch of one of the most powerful websites on the e-commerce market and creating a network of franchises in the national territory. The company is already using Casillas on their website and social media platforms, and Iker also took the opportunity to give some visibility to Fútbol Factory through his own official accounts. 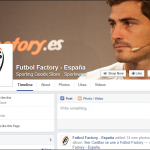 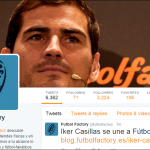 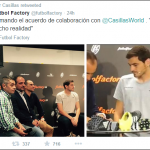