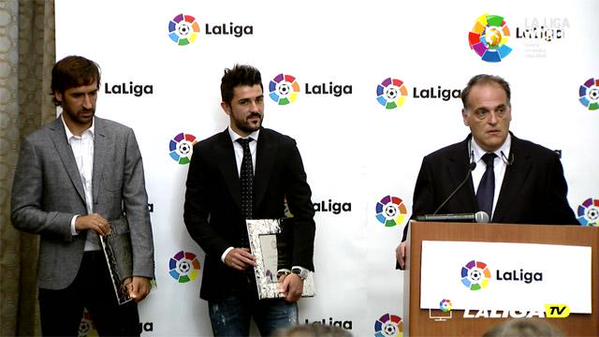 New York was the setting for the announcement of two major signings that will join the international expansion project of La Liga: Raúl González and David Villa.

La Liga president Javier Trebas, accompanied by Amadeo Salvo, chief executive of Valencia CF on behalf of the Spanish professional clubs, and Nacho Martinez Trujillo, gave them two honorary plaques that distinguish them as Global Ambassadors of the league.

Both players were smiling, approachable and very proud to receive such a great recognition from their home countries. Raúl, currently playing for NY Cosmos, said “I am delighted to be able to participate. La Liga is growing for the better and we all feel that strength. On the other team in town, the New York City FC plays David Villa. “It is an honour to be appointed ambassador to take my country all over the world. It is well known the work and growth of La Liga, already the best”.

Javier Trebas highlighted the importance of this agreement, stressing the virtues and values of both players off the pitch, on top of his achievements on the pitch. “Professional football needs not only records, also values. You are ambassadors for your successes and the ability to sacrifice and work hard that you have shown during all these years. We count on you to spread the name La Liga”.

Numbers and stats are also on their side given that Raúl accumulated 228 goals for Real Madrid in 550 games in the league, and David Villa amassed 184 goals and 352 games as a player of Real Sporting, Real Zaragoza, Valencia CF, FC Barcelona and Club Atlético de Madrid.