Fernando Torres presented in Madrid, next to Spanish athlete Chema Martinez, the latest sneakers Ultra Boost by Adidas. The event was held two days before the Champions League derby against Real Madrid and it gave Adidas great exposure because the event was largely covered and Fernando’s answers published by the different media that attended the event. The timing was excellent to maximize Adidas’ exposure because the interest and expectation that the derby raised was very high.

Fernando Torres also took the opportunity to promote the brand and to give visibility to the event through his social media accounts. Below these lines you can see an example of how he announced it on Twitter. 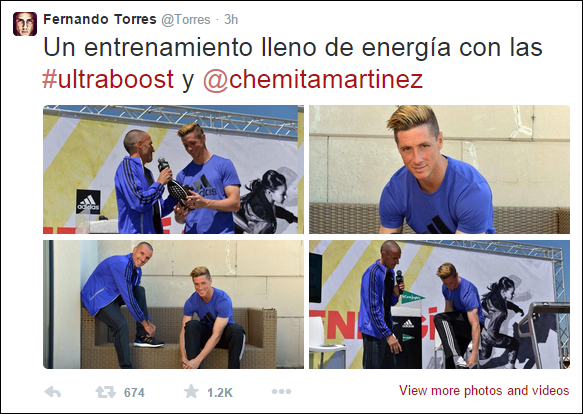 A few days later, the brand repeated a similar formula in Barcelona, this time with FC Barcelona’s midfielder Ivan Rakitic. The player attended an event organized by the German brand where the Croatian midfielder changed roles and became a coach for a day. In one of Futbolmania stores in Barcelona, Rakitic surprised a group of young players by conducting a very special training.

Afterwards, the player answered questions about Luis Enrique, the possible triplet and his relationship with Xavi Hernandez, another Barcelona icon committed to Adidas, in front of the media that attended the event.

A few days later, Ivan Rakitic participated in another event organized by Adidas, where he shared his football skills with the SkillTwins.