Cesc Fàbregas is one of PUMA’s biggest and most active ambassadors and he features in most of the brand’s campaigns. We recently saw him next to Mario Balotelli in the latest advert by the German brand and now he has been actively participating in the activation of the Champions League game that saw Chelsea face PSG. Next to PSG’s player Marco Verratti, who happens to be a PUMA ambassador as well, Cesc participated in a Head to Head interview with the Italian player and he actively promoted it on his social media accounts. Social Media posts and digital assets are commonly used by PUMA in their campaigns and Cesc Fàbregas has a solid fan base that helps the brand spread their messages.

Below these lines you can see some examples of his most recent tweets/posts regarding the campaign he did with Mario Balotelli and the latest Head to Head with Marco Verratti. 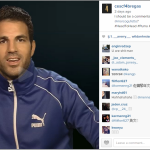 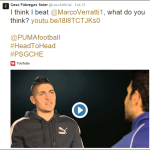 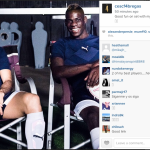