Portugal and Argentina face each other tonight at Old Trafford. In principle just a friendly game; in reality, the match is yet another episode of the long standing rivalry between Cristiano Ronaldo and Lionel Messi. A rivalry that does not have a stable winner in terms of success on the pitch overtime -although Messi would probably be ahead- nor in terms of commercial success -probably the other way around for Ronaldo-.

But when it comes to social media, Cristiano Ronaldo is the undisputable “Ballon d’Or”. With a whopping 160mio followers figure, Real Madrid star clearly leads the way with 53% more engagement than Messi (104 mio). In a global top 10 of football players, Neymar would be number 3 with around 80mio followers, rapidly closing the gap with his teammate at FC Barcelona. Players in decline such as Kaka and Ronaldinho would complete the top 5, with Rooney, Iniesta, Özil, James Rodriguez and Gareth Bale following to the top 10. All in all, all 10 players except Rooney play or have played for either Real Madrid or FC Barcelona. Impressive. 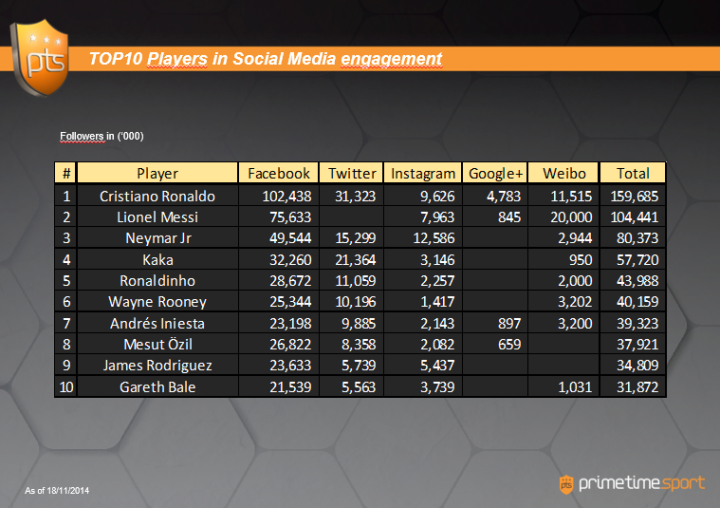 The social media ranks are of paramount importance to sport marketers advising the different players, as the higher the number of followers, the higher the commercial value and return on investment for brands linked to them. That is why is so important to understand the reasons for such an important difference between the 2 best players in the world. I would highlight 3 of them:

In the near future, I expect to see a growing number of social media centric campaigns featuring players, not just the most popular in the world but any other capable of reaching a sound critical mass. Sport marketers should rather concentrate in this important element of the commercial equation. There is money waiting for them and their players.