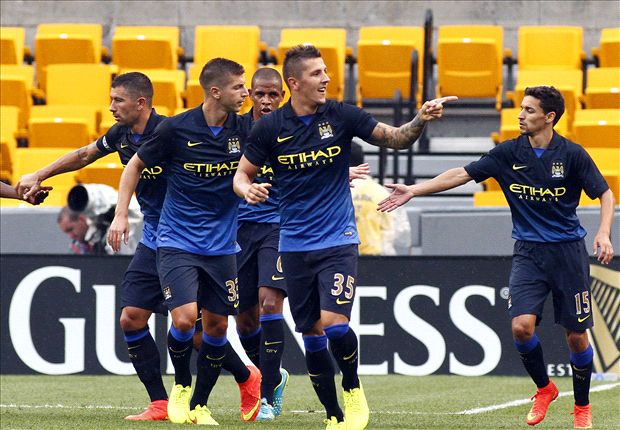 The team is looking good so far in this pre-season and an exciting season is ahead of us in the Premier League, but the team is not complete yet because it won’t be until the 5th of August that the Argentinian trio (Kun Aguero, Pablo Zabaleta and Martin Demichelis), Bacary Sagna and Fernandinho will be back from their holidays after a great performance in the World Cup.

Manchester City FC played the first pre-season game 15 days ago and it seems to be improving ever since. The team landed in Kansas on July 21st for the USA pre-season tour, where they have netted 9 goals and conceded only 2 in 2 games. Performance is expected to be even better when Aguero, Fernandinho and co. are back. In the last game Manchester City claimed an impressive 5-1 victory over Milan in a weather-hit friendly at the Heinz Field in Pittsburgh.

Stevan Jovetic, called to be very important this season, gave the Premier League champions the lead after 12 minutes with a low shot that crept in at the near post and three minutes later Gaël Clichy picked out Scott Sinclair in the box and he scored the second from close range.

Midway through the first half Jesús Navas’s acrobatic effort from just outside the box took a huge deflection and left the Milan goalkeeper, Michael Agazzi, with no chance.

Rampant City added a fourth after 27 minutes when the Nigerian striker Kelechi Iheanacho, the promising Nigerian who has been training with the club for the past few weeks, collected the ball on the edge of the box and turned 180 degrees before firing home. Two more goals would come in the second half, one for each side.