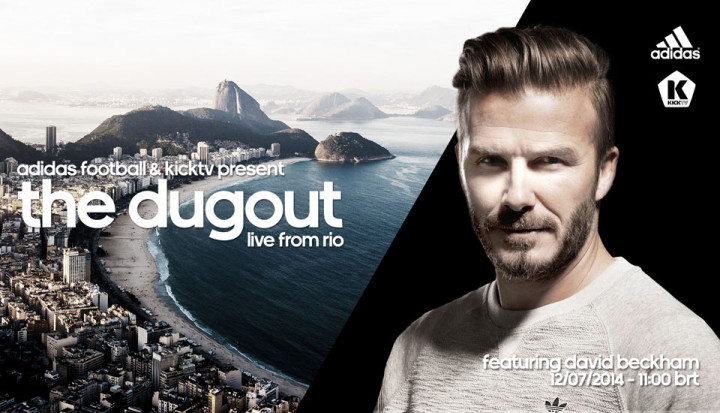 Adidas and Nike are arguably the main contenders in the race of the sports wear. Both brands did great during the World Cup despite being Adidas the only official sponsor of the competition. That is because besides being sponsors of big events and competitions, both brands know how to use their brand ambassadors to gain visibility and to engage with fans.

In this occasion, Adidas brought England’s legend David Beckham to Brazil to participate in The Dugout. For this activity and as described by the brand:

“David Beckham joins us in The Dugout ahead of the World Cup Final to get the low down on the tournament’s climax.

The Dugout is adidas Football’s opportunity to bring you closer to the action in Brazil. Helping you to go #allin or nothing. Throughout the FIFA World Cup 2014 we will be hosting live shows with some of the biggest names in global football.

Hosted by Kick TV stars Layla Anna-Lee, Hugh Wizzy and Jimmy Conrad, The Dugout will give fans the opportunity to take part in a virtual press conference. Incorporating live interviews, adidas product reviews, behind-the-scenes action with adidas teams and fans on the ground and chances to win prizes and products.”