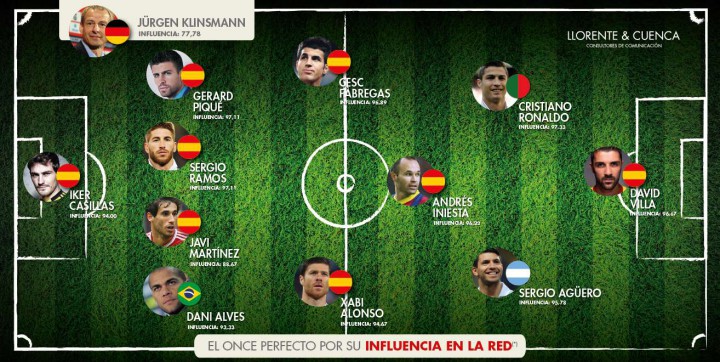 The Spanish consultancy Llorente y Cuenca created what they called “The Map of Power in the Net – Players, coaches and National Team # brasil2014”. It is an initiative by the online communication team in the firm, which identifies all the players in the World Cup, studies the level of implementation of their digital identity and assess their influence on Twitter. Data for its realization was collected between June 2 and June 9, 2014.

Among the 800 players, teams and coaches studied, Cristiano Ronaldo, with over 26 million followers, and the last winner of the FIFA Ballon d’Or  is arguably the player with greater presence and influence on Twitter, with a factor of 97 ’33, leading thus the TOP50. The second place is shared between Gerard Piqué (more than eight million followers) and Sergio Ramos (over four million), with an influence factor of 97.11. In the third place, playmaker Cesc Fabregas, with more than six million followers and a score of 96.89.

What would be the best XI according to his influence in the Net?

Eight of the players in this perfect XI as per their influence in the net belong to the Spanish national team and are precisely those who have won more international tournaments in recent years. While the remaining three selected players belong to Argentina, Brazil and Portugal. The complete eleven: Cristiano Ronaldo (97.33), David Villa (96.67) and Sergio Aguero (95.78) on the line of attack; Cesc Fabregas (96.89), Andrés Iniesta (96.22) and Xabi Alonso (94.67) on the steering wheel; Gerard Piqué (97.11), Sergio Ramos (97.11), Javi Martinez (88.67) and Dani Alves (93.33) in the defense; and Iker Casillas (94,00) in goal.