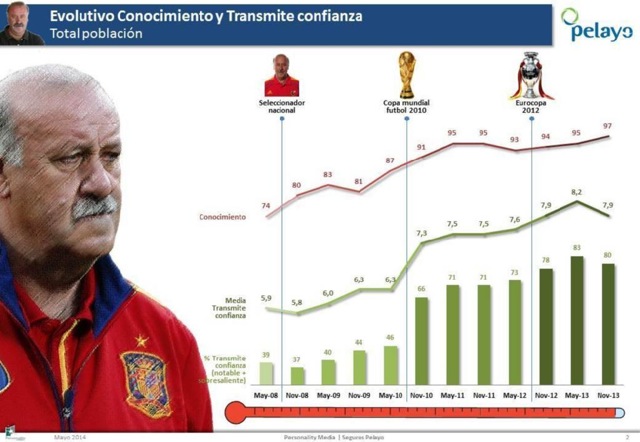 Vicente del Bosque has become the most trusted celebrity associated to sport in Spain.

According to the analysis of the data that has been gathered by Personality Media since Vicente del Bosque began in 2008 to lead the Spanish National Team, he has become one of the most popular , best rated and trustworthy characters in the advertising industry , where for years has been part of the family Seguros Pelayo.

Since then, “Awareness”, taking into account Spanish total population, increased from 74% to 97% over other members of the National Team like Iker Casillas (95%) or Pepe Reina (83%).

As General Rating stands, the coach is currently the highest rated with 7.8 points out of 10 , above everyone else in the National Team.

In the variable “Trustworthy” his rates are very high, evolving from 5.9 in May 2008 to 7.9 at the end of 2013, ranking first among 342 national and international sports men included in the study. To understand the relevance of the data, 80% of consumers will rate him above the 70% today.

This fits perfectly with the concept of togetherness that Seguros Pelayo has tried to reflect  to its customers in recent years. In Pelayo, people are convinced that a character must not only be known to be part of a brand, but his values ​​must play in tune with which the advertiser seeks. In this particular case, he represents the best option in the world of sport.

Regarding Pelayo’s marketing and promotional activity, the coach has managed to increase by 20% the number of consumers that know the brand Seguros Pelayo and he has become the brand ambassador more associated with the Insurance sector.

Currently, the image of Vicente del Bosque is present in 98% of the advertising activity of the brand. Although the marketing budget of Pelayo is 60% lower than the top three advertisers in the Insurance Sector, thanks to its advertising strategy, Pelayo has managed to be the first brand in the minds of consumers when they think about Vicente del Bosque , who is the character most associated with the Insurance Sector .

Thanks to his natural management of this media success, Vicente Del Bosque has become a reference to the Spanish consumer.