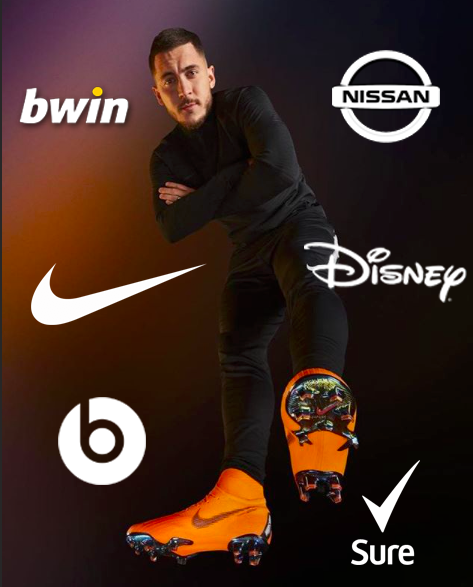 Eden Hazard was previously an amazing profile to work with for top brands. However, his signing for Real Madrid this summer has taken his commercial value to a whole new level. The Belgian magician, with 22 million followers on Instagram, has been working lately with major brands like Disney, beatsbyDre, bwin, IceWatch, DongQiudi or Sure. Of course he’s an ambassador also for Nike and Nissan, his major deals. How will his off the pitch activity increase now he has joined Real Madrid? The next big step of his career has just begun.

Hazard has shown to be a nice and thankful talent to work with. In his last association with Nissan he even gave some leads of his next destination, that was finally Real Madrid. Always with a smile and a positive attitude, at his 28 years old has the perfect profile for commercial activity. He’s also a familiar guy, married and with three children. However he is not sharing, for now, his private life in social media.

Hazard is a Nissan partner since 2018 and is associated with Nike since 2012. He was tempted by Adidas a few years ago but decided to stay with Nike and become one of the major football talents of the brand alongside Neymar or Cristiano Ronaldo. Will Adidas try to capture him again since joining their biggest represented club like Real Madrid? Many brands from all areas will now turn their eyes to this amazing footballer who has become a new Galactico after switching Chelsea for Real Madrid for 105 m€.