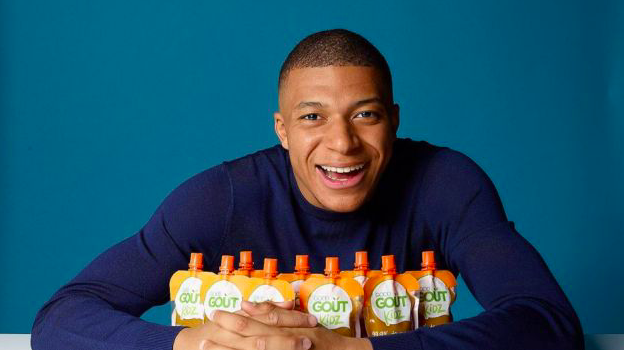 The best U-21 football player in the world, Kylian Mbappé, has been announced as a global ambassador for Good Goût, a French organic baby and children’s food brand. PSG star, who is facing another summer of transfer rumours after another disappointing campaign of his club in the Champions League, seems that the striker is committed with the club and his country and he’s making roots in France, at least commercially.

There are few better sports stars to join forces with for a French company than Kylian Mbappé. Especially now that he is 20 years old and has a full and glorious career ahead of him. For Mbappé this partnership is also great as he associates his own brand to a company that promotes good values and intends to help children. That is why Mbappé and Good Goût will work together on activites surrounding the launch of the forward’s charity foundation.

The partnership will initially run for two years. Mbappé said: “Good Goût is a brand committed to raising healthier children. Their philosophy aligns very closely to mine and I’m excited about the future kids to a healthier and happier life”.

Pascale Laborde, Good Goût Chief Executive, added: “We are very excited to be joining with Kylian and believe this will be a partnership, not just for Good Goût and Kylian, but also for the broader community in relation to the positive messages and social change we are hoping to initiate”.