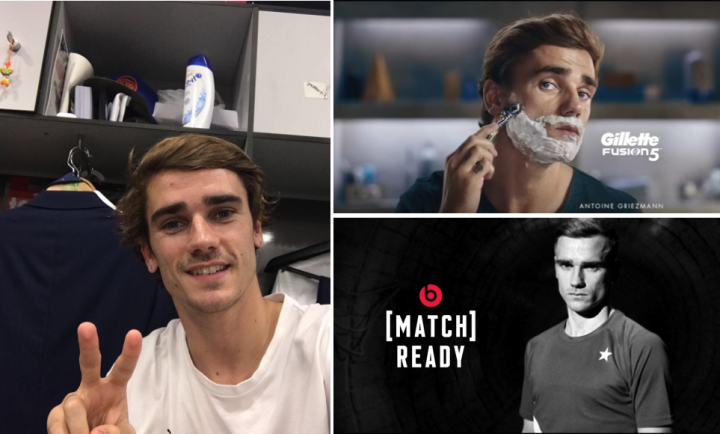 The name Antoine Griezmann is no strange to any football fan today. The French striker has been improving and growing fast in the last couple of seasons, both on and off the pitch. His quality and skills with a ball on his feet made him reach a Champions League final last season with Atlético de Madrid and a UEFA Euro final a few months later with France. His personality, his looks and the values that he projects, have turned him into a very attractive proposition off the pitch too. He is today the total footballer in Europe, adding commercial success to the one he has on the pitch.

Brands understand that Griezmann is a player on the rise and that associating with him is a smart move to engage with football fans. His personal values and friendly looks, have made him sign endorsement deals with the likes of Gillette, H&S, Puma or Beats by Dre. He is arguably the best player in France right now and the most active and successful off the pitch. Not only he signs deals with top brands like the ones mentioned earlier, but he also receives celebrity-like requests, like being part of the French version of the animated LEGO Batman movie.

There are a number of factors that contribute to positioning him as an ideal ambassador for brands and the best endorser of their products: he is young, he is a fantastic player, he has the looks and he has a huge legion of fans on social media. Despite not being in one of the most popular teams in Europe, as of today -and being only 25 years old- he has more than 3.4 million followers on Twitter, 8.5 million on Instagram and 6.7 on Facebook. His 18.5 million social media followers are yet another strong argument to convince brands that he is the right choice.

And now Manchester United is reportedly showing interest in him… Is he the next Cristiano Ronaldo? With the likes of Messi and Cristiano himself reaching the last years of their careers, do you reckon he can be as successful as they are now both on and off the pitch? It sounds very ambitious, but he is certainly well positioned to try it…