Neymar tested the new 4k technology in an event, organised by Panasonic in Barcelona. The Japanese brand and the Brazilian have been working together since 2010, and Neymar serves as an ambassador for Panasonic all around the world. The technological company recently chose Neymar to test out its latest innovations and to give visibility to the new gadgets and technology by Panasonic.

During the event, which was largely covered by Spanish media, Neymar participated in an experiment, where the fans had to try to find out if the Neymar that they were seeing on screen was real, or his digital verion. Panasonic‘s message with this is that the 4k technology is so realistic that it is very hard to differentiate. 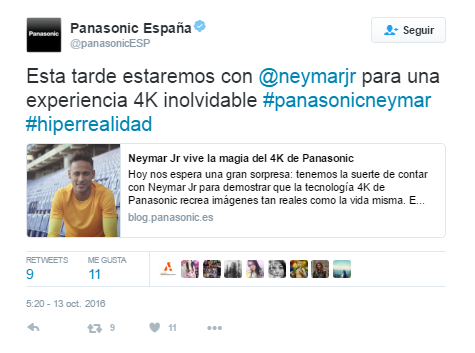 On this occasion, Neymar did not post anything on his social media accounts, but Panasonic still announced the event and mentioned Neymar on the brand’s posts, to try to reach some of his 25M Twitter followers. At the end of the event, Neymar answered the questions from the press, which would be later published alongside some branded pictures of the event. During the Q&A, he mentioned that he wouldn’t change his style despite the criticism, and that he does not like to watch football on TV, he gets very anxious and doesn’t enjoy it as much as watching TV series or movies.