Arsenal and Germany football player Mesut Özil has been named as an ambassador for the German carmaker Mercedes-Benz, which is also one of the main partners of the German national team. The former Real Madrid midfielder is taking part in a series of promotional campaigns for the automotive giant that included a Twitter Q&A and a visit to Stuttgart, where he met Roger Federer -another brand ambassador- to reveal the new Mercedes-Benz E-Class T-Model.

Roger Federer participated this year in the Mercedes Cup at the Tennis Club Weissenhof in Stuttgart and took the opportunity to present the new model alongside Arsenal’s star Mesut Özil and to wish the German player good luck in the upcoming Euro 2016.

Özil, a prolific user of the social media platform Twitter, had previously announced the deal with the Stuttgart-based company on the micro-blogging service and said: “It has always been my favourite car brand; Mercedes has history, tradition and it has been authentic for decades”. The announcement was linked to a Q&A where he responded all kinds of questions to his followers and the fans of the brand. 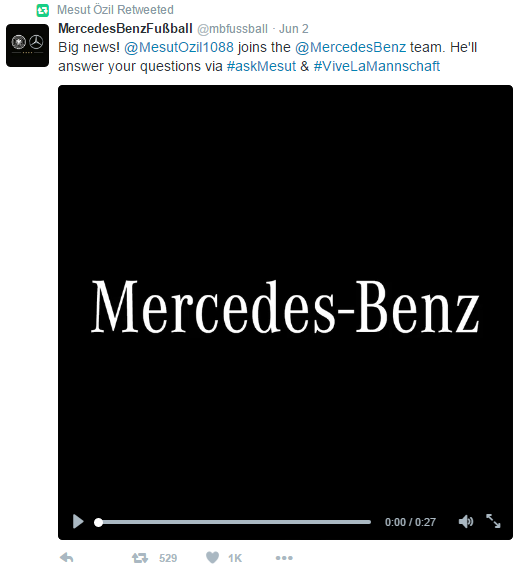