The world’s largest chain of fast food restaurants McDonald’s has started a campaign for the EURO 2016 with the Head of Welsch Football – its ambassador  Ryan Giggs.

Manchester United player together with his fellow McDonald’s ambassadors Martin Keown and Pat Jennings have been promoting a competition to give kids the chance to win the opportunity to become McDonald’s Player Escort at the EURO 2016.

To participate, parents have to upload pictures of their kids showing their passion for football.

Ryan Giggs, said: “Everyone in Wales has been inspired by the national team reaching the UEFA EURO 2016™ Finals and for the lucky few who will be chosen as a McDonald’s Player Escort, the fairy-tale doesn’t end there. Walking out to a deafening ovation from your national fans is an incredibly special moment and this is an amazing opportunity that will stay with these young fans for the rest of their lives.” 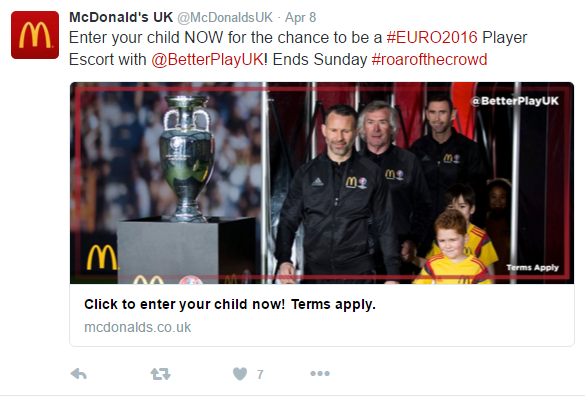