Portuguese superstar Cristiano Ronaldo has sold his image rights to Mint Media, company which is owned by Singaporean businessman Peter Lim, whose other properties include Spanish football club Valencia.

The Real Madrid forward, current holder of the Fifa Ballon D’Or award for the world player of the year, confirmed the partnership with the company on his own channels. “I am very excited to announce my latest deal with Mint Media, owned by my good friend, businessman Peter Lim from Singapore, to acquire my image rights,” said Ronaldo. “This is a very strategic move for me and my management team to take the Cristiano Ronaldo brand to the next level, especially in Asia.” 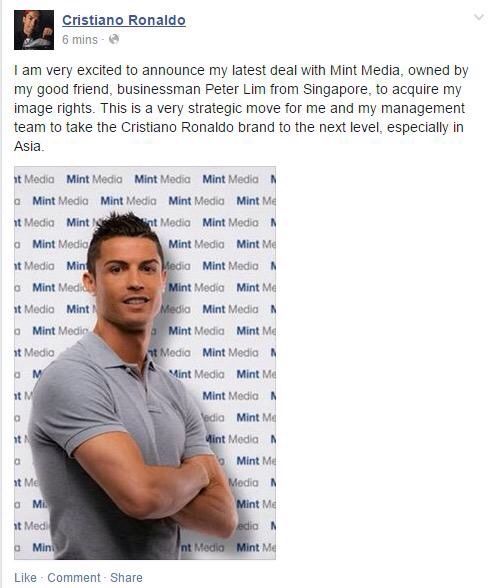 Ronaldo, who is estimated by Forbes to be Europe’s best-paid athlete, is represented by Jorge Mendes and the Gestifute International agency. He was ranked 16th in SportsPro’s list of the world’s most marketable athletes earlier this year, has endorsement deals in place with brands including Nike, Tag Heuer and Herbalife, and has his own CR7 fashion brand. A documentary following a year in his life is currently in development.