For the launch of PUMA’s new evoSPEED 1.3 Dragon, Manchester City striker Sergio Agüero and Borussia Dortmund midfielder Marco Reus met up for another unusual football encounter. Sergio Agüero is one of the brand’s most notorious ambassadors and the common denominator to most of the brand’s campaigns.

In this occasion, this epic Dragon clash took place on the square pitch that was first introduced earlier this month ahead of the Manchester Derby, when Radamel Falcao and Sergio Agüero took each other on. The special pitch has four goals covered by sliding doors that are operated by the fans to keep the players on their toes. As one goal opens another one shuts in a new style of football that tests the players’ every ability.

Agüero also took the opportunity to announce it across his social media accounts, thus giving some visibility to PUMA and promoting the brand in front of his fans and followers. With a critical mass of almost 20m followers across all three platforms (Twitter, Instagram and Facebook) he is a fantastic platform to promote a brand. A good example is the fact that the video that he posted on his Facebook timeline has been viewed almost 4m times.

Sergio Agüero is a very popular player and PUMA consider the Argentinian one of his global ambassadors and a very valuable asset. Thus, the brand has recently used him in its communications all over the world. Below these lines we can see an example from New York. 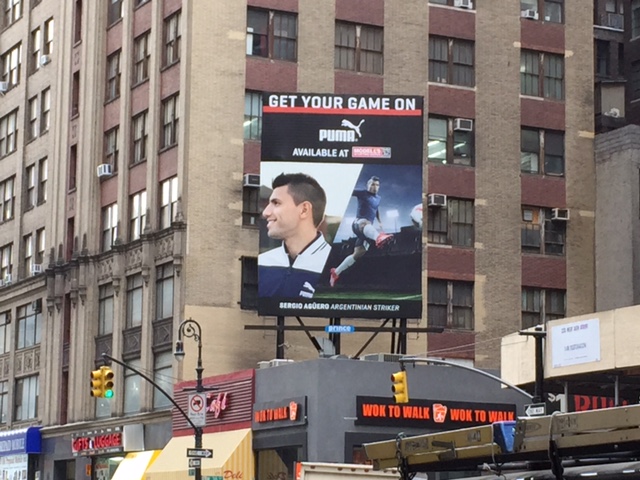