Usain Bolt is probably the most popular athlete in PUMA’s portfolio but the German brand also has a few, and very popular, football ambassadors, such as Yaya Touré, Kun Agüero, Cesc Fàbregas or Mario Balotelli.

The latter two being the stars of the new campaign Head to Head next to Thierry Henry. The outcome is a very nice TVC that the brand and the recently retired French star have been actively promoting on their social media accounts. 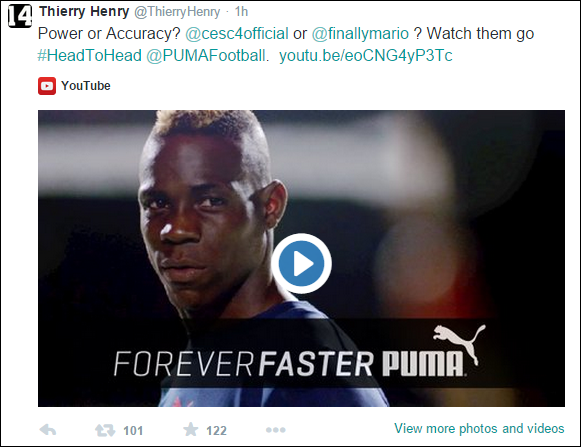 PUMA is trying to keep up with his main competitors, Nike and Adidas, and with the newcomers, such as Under Armour, who are giving it all to be up there with the others, to raise awareness and to gain some market share. To do so, the brand’s campaigns need to be innovative and creative, and the latest one is a good example of it.

For the launch of the PUMA evoPOWER 1.2 football boot, the two football stars show off their skills closely watched by Thierry Henry.