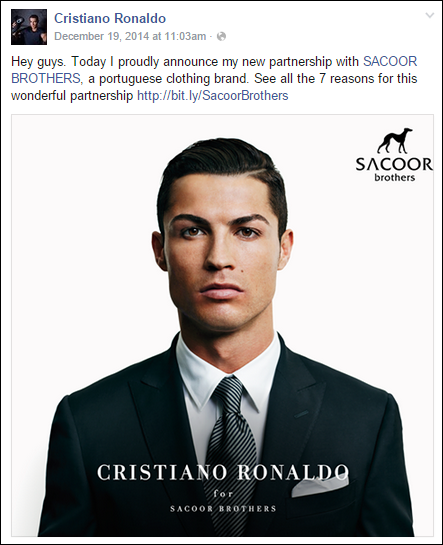 Cristiano Ronaldo has started 2015 with yet another partner in his portfolio. Sacoor Brothers, the Portuguese lifestyle fashion brand that launched in 1989 its first boutique in Lisbon, has chosen Cristiano Ronaldo as their new face in order to bring creative and aspirational values to the fashion label. Cristiano Ronaldo himself announced it on his Facebook account before the holidays and he will feature in the brand’s new adverts during 2015.

“I see myself in the brand’s value: commitment, success, professionalism and constant improvement” explained Cristiano, who had been shooting Sacoor Brothers‘ 2015 spring-summer campaign in Madrid.

In the last 25 years, Sacoor Brothers has gone from strength to strength, representing elegance and sophistication through their premium collections. Their men, women and kids lines are very popular among celebrities in the world of fashion, cinema and television and their flagship boutiques in the Middle East are expanding year after year, with stores in Dubai, Abu Dhabi, Kuwait and Qatar. Below these lines you can see the 7 reasons why the partnership between Sacoor Brothers and CR7 makes perfect sense according to the brand. 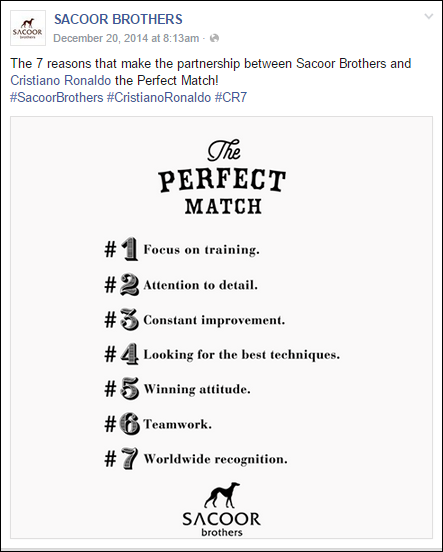